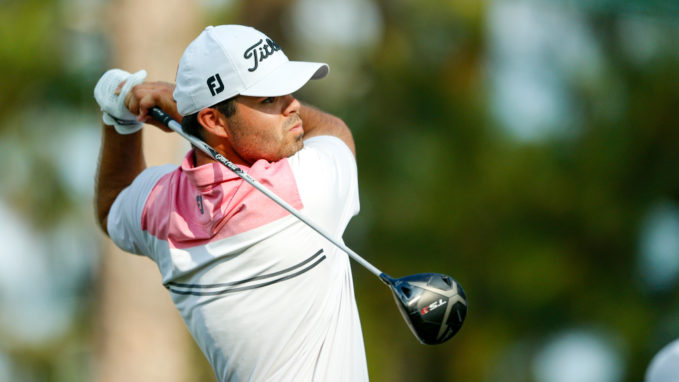 PINEHURST, N.C. – After rain delayed the final round of stroke play on Tuesday at the 119th U.S. Amateur, play resumed early Wednesday as 312 players fought to make the 64-player cut for match play.

Once the second round was completed, 27 players went to a playoff for the final three match play positions. Four holes and just south of four hours later, Van Holmgren, Chad Sewell and Austin Squires moved on to the Round of 64.

While Sewell lost to second seed Ricky Castillo 5 and 3, Squires and Holmgren continued their quest for the Havemeyer Trophy by upsetting the Nos. 1 and 3 seeds, respectively.

Squires, a 2019 graduate of the University of Cincinnati, took out stroke play medalist and the tournament’s top seed, Brandon Wu, 2 up in the final match of the day. Wu, a member of Stanford’s national championship team this past season, entered the week No. 11 in the World Amateur Golf Ranking and was a heavy favorite to contend for the title.

“It was definitely frustrating because I felt like I was playing really well,” said Wu, who only made one birdie in two days playing Pinehurst No. 2. “Couldn’t really convert any birdies.”

While Squires doesn’t think you can have an upset in a field of such strong players, he’ll be riding the momentum to Thursday’s Round of 32.

“It was a huge confidence boost beating Brandon Wu, he’s coming off an incredible summer. I knew I had my hands full today,” said Squires. “I don’t know who I’ll play tomorrow but I’m sure I’ll have my hands full tomorrow as well.”

Holmgreen, a junior at North Dakota State, defeated England’s Tom Sloman 3 and 2 earlier in the evening for the fifth top-10 upset in the Round of 64. Wu’s loss to Squires was the sixth.

Maybe the most interesting story of the day comes to us from Baylor’s Cooper Dossey, who was a 4-and-3 winner over Travis McInroe. Not only is McInroe a fellow Texan and Baylor teammate of Dossey’s, he’s also his roommate.

“I feel comfortable here. I feel right at home,” Dossey said after his Round of 64 win. “The course fits my eye. I’ve had good caddies. My little brothers have been on the bag and they have kept me calm.”

The odds of the Dossey-McInroe match were slim, but the duo chose to look on the bright side.

A notable name missing from match play was Texas sophomore Cole Hammer, the No. 1-ranked amateur in the world. Last year’s stroke play co-medalist and match play semifinalist failed to advance out of the playoff with a bogey on the first hole. 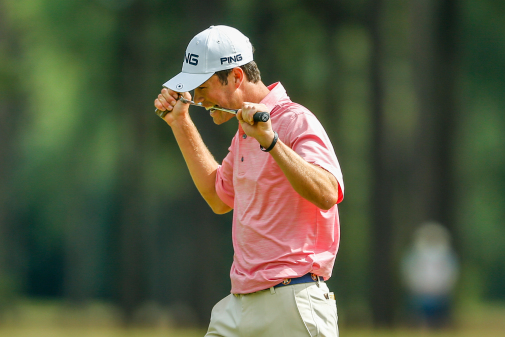 Cole Hammer reacts after missing a putt during the 27-for-3 playoff on Wednesday at the 2019 U.S. Amateur at Pinehurst. (Photo: USGA/Michael Reaves)

The 2018 U.S. Amateur runner-up Devon Bling, the rising-junior at UCLA who put on a show at the Masters Par 3 Contest, qualified for match play once again this year but lost to Steven Fisk 6 and 5.