Tiger Woods reacts to fan who bet on him to win Masters, Grand Slam 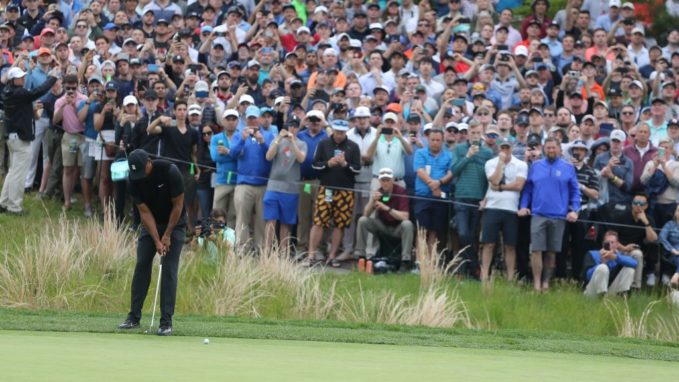 Who says Tiger Woods doesn’t like to have fun with fans?

In an Instagram video posted Friday by Adam Weinraub (@adamweinraub), Tiger Woods had a quick response when asked about the $85,000 bet placed on him to win the Masters in April.

On his video, Weinraub wrote the caption, “I got to ask Tiger Woods what everyone wanted to know!” And so he asked.

Once the crowd watching Woods take a few swings quieted down, Weinraub can be heard asking Woods, “Tiger, what do you think about the guy who bet $85,000 for you to win the Masters?”

Without missing a beat, Woods responded, “(Expletive) great bet,” which earned a roar of laughter from fans.

Before taking another swing, Woods paused and faced the crowd again saying, “Dumbass on the Grand Slam part, though,” earning another roar from the crowd.

Caution: This video created and posted by Weinraub contains some rough language.

The man who placed the $85,000 bet on Woods to win the Masters in April was James Adducci. Adducci placed his first sports bet ever on Woods ahead of the Masters which resulted in a $1.275 million payoff. Adducci placed another bet earlier this month— this time at $100,000— on Woods to win the Grand Slam with 100-1 odds ahead of the PGA Championship. If Adducci had won the bet, the payoff would have been $10 million.

Woods missed the cut at the PGA Championship just over one month after winning the Masters. His next event will be the Memorial at Muirfield Village in Dublin, Ohio beginning Thursday.

Woods, who is also expected to play in the U.S. Open June 13-16, was seen practicing at Pebble Beach this week.