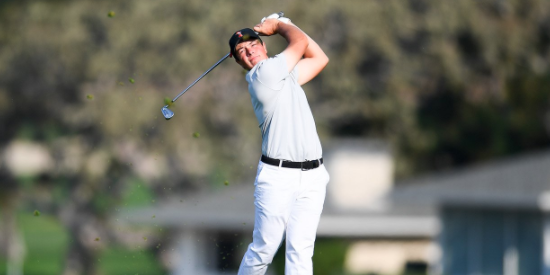 Hovland lived up to his top billing in his opening match with a comprehensive 5-and-4 win over Germany’s Lukas Euler at Royal Aberdeen.

Hovland is ranked fifth in the World Amateur Golf Ranking, one place above England’s Matthew Jordan. Rankings often don’t mean much in match play, but they did on this occasion. Euler, who plays college golf at Kentucky, is the world’s 230th best player. The gulf looked obvious.

Hovland, who had future Cowboy teammate Rayhan Thomas supporting him, was never troubled in the match.

“I was 3 up after six, went 4 up after eight and I just sort kept the gas pedal down,” the rising junior said.

The Oslo native is trying to take a more relaxed attitude to his game at the moment.

“I’ve realized when you’re playing well that a bogey doesn’t really affect you,” Hovland said. “You know your game is going to transcend through that because you’re playing well. In this format, you can take a couple of risks because if you make double bogey and lose the hole then you can just birdie the next.”

The plus-4 handicapper is also trying to ignore his ranking.

“I feel pressure but not because I’m the top ranked player,” Hovland said. “It’s internal pressure because I want to win. I want to perform. If I don’t I’ll get disappointed. I don’t care what people say.”

Hovland is playing his second Amateur Championship after failing to qualify for the match-play rounds last year. He hung around to caddie for countryman and former OSU teammate Kristoffer Ventura.

Ventura lost in the fourth round to eventual winner Harry Ellis, 3 and 1. Don’t be surprised if Hovland goes much further this year.

South Africa’s Wilco Nienaber avoided the medalist curse with a 5-and-4 victory over Sweden’s Niclas Weiland. He is trying to become the fourth player to lead the qualifying and go on to win.

Phil Mickelson on U.S. Open controversy: ‘Not my finest moment and I’m sorry’

Jason Day on Mickelson: ‘Disappointing to see what Phil did’

Hubert Green, who overcame death threat to win ’77 U.S. Open, dies at 71Mickelson "Embarrassed And Disappointed" After US Open Penalty