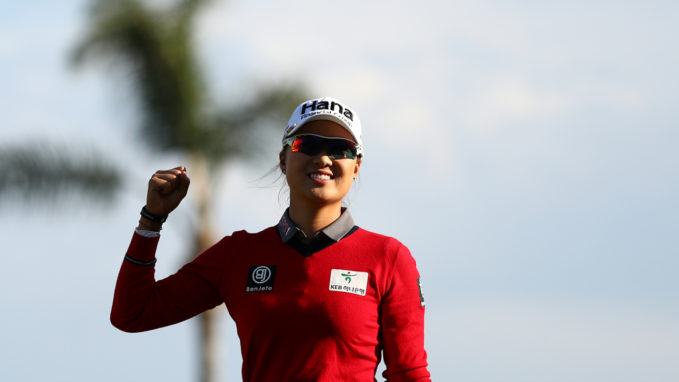 LOS ANGELES – The second edition of the HUGEL–AIR Premia LA Open lacked the drama of a Hollywood script thanks to the exquisite play of Minjee Lee.

Her missing polo – soaked from the 18th-hole celebration – was the day’s biggest mystery.

The young Aussie held a five-shot lead when she made the turn at Wilshire Country Club, and while Sei Young Kim tightened it up down the stretch, the 22-year-old collected her fifth career LPGA title with a leisurely walk up the par-3 18th.

Lee is projected to move to No. 2 in the world.

While the event is still new, 100-year-old Wilshire Country Club provides a spectacular stage with its dramatic bunkering and generous galleries. The course, set in the historic Hancock Park area of Los Angeles, befuddled plenty of LPGA stars with its deceptively difficult greens. 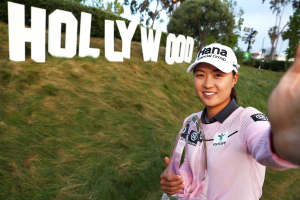 Minjee Lee takes a selfie as she poses with the trophy after winning the HUGEL-AIR PREMIA LA Open at Wilshire Country Club on April 28, 2019 in Los Angeles. Photo: Yong Teck Lim/Getty Images

But it also gave up plenty of low numbers, with 64s from Megan Khang and Amy Yang and a gaggle of 66s.

Lee, who had two top-three finishes on the season coming into the event, punctuated her latest victory with the third birdie of the day on the testy 18th to win by four over Sei Young Kim.

Lee finished at 14-under 270 thanks to a closing 68. Kim put together her best finish of the year with a final-round 66. Annie Park (67) and Morgan Pressel (68) finished in a share of third, the first top-10 finish of the season for the American pair.

Last year Pressel posted her only top 10 of the season at Wilshire.

“I was thinking about this on the last couple holes, how differently I played both years,” she said. “Last year I was really squirrely with my ball-striking. Wasn’t really confident, but managed to kind of scrape it around. Putted really, really well. Got up and down from everywhere.

“This year I hit a ton of fairways and a ton of greens and missed so many birdie opportunities, but still managed to make a few and just played really steady golf this week.”

Nanna Koerstz Madsen came into the final round trailing Lee by one stroke. The Dane, playing in her first final pairing on the LPGA, struggled to a 76 to drop to 13th.

Inbee Park put on a ball-striking clinic the first three rounds but couldn’t find her usual magic on the greens. Her patience wearing thin, the LPGA Hall of Famer finished in a share of fifth alongside current No. 1 Jin Young Ko.

“Even today I got a message,” said Lee of Webb’s support. She’s like ‘way to stay patient out there, well done.’ ”