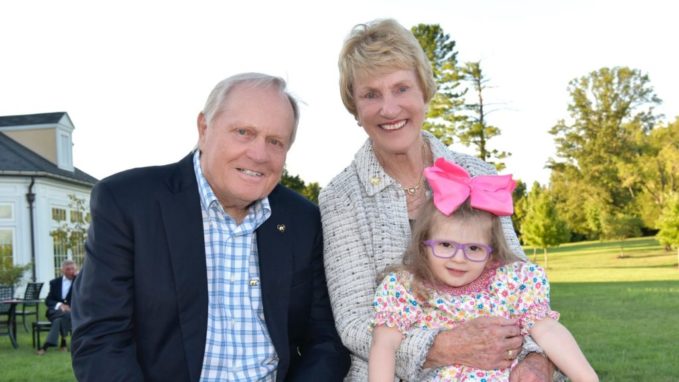 ALDIE, VIRGINIA — Jack Nicklaus is pushing 80 years of age, but one of the greatest to ever swing a club still has some game on the course.

No, the Golden Bear doesn’t hit it nearly as far as he used to back when he won a record 18 major championships, but his short game is still impressive.

Last week on the 18th hole at The Club at Creighton Farms, a course Nicklaus designed that opened back in 2007 in Northern Virginia, the 73-time PGA Tour winner found his ball in a greenside bunker. Nicklaus made it look easy, sticking his shot within a foot or two of the pin for a champion-esque up-and-down.

“I play about 20 rounds of golf per year,” Nicklaus said. “And I’d say probably 18 of them are at charity events. It’s basically all I do.”

His most recent event, the 2019 Creighton Farms Invitational, was an 18-hole golf tournament that benefited The Nicklaus Children’s Health Care Foundation and the National PKU (Phenylketonuria) Alliance.

“For the first 30-40 years of our marriage, Barbara supported me,” said Nicklaus, referencing his wife with whom he’s been married since 1960. “This isn’t my deal, this is her deal. I’ve had a ball because I’ve met a million new people and done a bunch of stuff I probably never would have done before. It’s been very rewarding for me.”

In the event’s eighth year, the Creighton Farms Invitational raised $1.2 million, which will be split between the two benefiting charities.

PKU, a rare inherited disorder that causes an amino acid called phenylalanine to build up in the body, had a research budget of around $100,000 a year, according to Nicklaus. In just a matter of days, the event raised six times that amount.

“Barb and I started our foundation 15 years ago,” Nicklaus said. “We’ve raised a little over $100 million dollars doing these kinds of events. It’s rewarded a lot of kids and that’s what we like about it.”

The man that gave so much to the game of golf is continuing to inspire and achieve even more in his time off the course.

Eamon’s Corner: What’s in store for Tiger Woods next season?