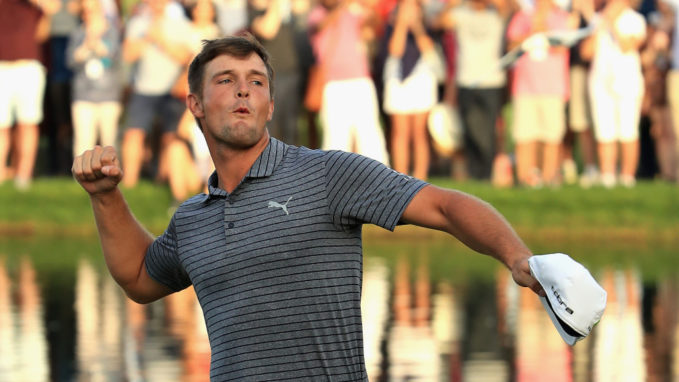 Bryson DeChambeau didn’t just win his first European Tour event – he ran away with it. The world No. 5 practically lapped the field to win the $3.25 million Omega Dubai Desert Classic.

The 25-year-old returned a closing 8-under-par 64 to set a tournament record. His 24-under 264 total for a seven-shot win bettered by one the 72-hole record Haotong Li set last year.

England’s Matt Wallace finished second on his own on 17 under. Li was third on 16 under in a group that included Spaniards Sergio Garcia and Alvaro Quiros, and Englishmen Ian Poulter and Paul Waring.

“It’s incredible to get my first win overseas, internationally on the European Tour,” said DeChambeau, who has now won four times in his last nine starts.

“Because it’s so different from the game of golf – you know it’s always been feel – I think it’s a little bit vindicating that I’m able to come out and have such success like this on multiple tours,” he said.

DeChambeau began the final round with a one-shot lead but quickly laid down a marker to the rest of the field that they were going to have to play exceptional to beat him. He birdied the first three holes to take a commanding lead he would never surrender.

Six pars followed his opening birdie blitz as he went to the turn in 32 shots. He practically sealed his maiden international win when he holed a 10-foot eagle putt on the par-5 10th hole. A birdie followed on the par-3 11th to move him to 22 under and a six-shot lead.

DeChambeau was in such a commanding position he had the luxury of making bogey on the 12th hole with no worries of losing the tournament. The dropped shot, his only one of the round, came after his second shot ended up in a bush.

Birdies at 13 and 14 put him back on track for a record score. He duly reached the record of 24-under with a birdie at the 17th.

The $500,000 first-place check moves DeChambeau to fourth on the European Tour money list, the Race to Dubai. He is the second American winner on the European circuit this season following David Lipsky’s triumph in the Alfred Dunhill Championship.

It is the 225th win by an American in European Tour history. After this performance, it seems a safe bet DeChambeau will add considerably to that tally.