Brandon Wu in line for medalist honors at U.S. Amateur 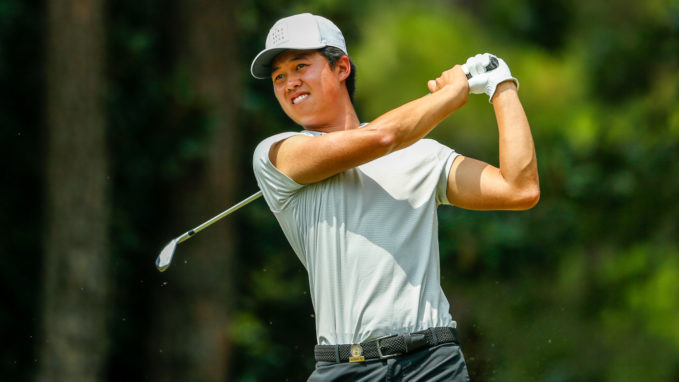 Stalled by weather on Tuesday, Brandon Wu will have to wait one more day to officially claim medalist honors at the 2019 U.S. Amateur.

Play was suspended due to storms at 8 p.m. ET on Tuesday with Wu holding a one-shot lead over six golfers.

The closest golfer with holes still to play is Spencer Ralston, who is 1 over through 16.

U.S. AMATEUR: Everything you need to know | Scores | Photos

Ralston would have to make up four shots on the 17th, a par five, and the 18th, a par 4, just to forge a tie. Not impossible but definitely a stiff challenge.

“Towards the back nine today was definitely tough, just because No. 2 is such a mental grind, as well,” said Wu after his round. “You’re trying to hit perfect shots on every hole just to maybe have a look at birdie, so that was kind of wearing down, and it was getting hot towards the end, too. Luckily I was able to finish it off, but I was definitely pretty tired.”

Tuesday’s delay lasted 1 hour, 21 minutes, so 50 players were unable to complete their rounds.

The second round will resume on Wednesday at 7:20 a.m.

A total of 66 players were at 4 over or better in the battle to claim a spot in the 64-player match play field.

Among those who likely will not advance:

Michael Thorbjornsen, who is T-107 after his second-round 78. He shot a 69 in the first round.

What the USGA says about where bunker rakes should be placed

USGA events for the 2019 season