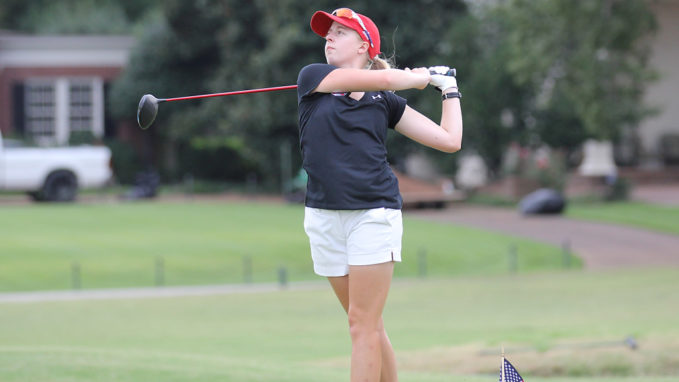 MIRAMAR BEACH, Fla. – In four previous trips to Sandestin Golf and Beach Resort’s Baytowne Course for the Golfweek Division III Fall Invitational, Rhodes College had never finished better than third or shot lower than 17-over 305 in a single round.

The latter changed Monday. The former could change Tuesday.

Rhodes fired a 12-over 300 in Monday’s second round to move to 41 over on the leaderboard. The Lynx lead second-place Carnegie Mellon by 12 shots entering Tuesday’s final round.

“On this golf course and in this wind, 300 was really impressive,” Rhodes coach Mike Clary said. “Today, we really put the ball, especially on our approach shots, in the right places and gave ourselves some chances to make some birdies, which we did.”

Through 36 holes, Rhodes has been led by a pair of sophomores. Tabitha Diehl of Highlands Ranch, Colo., is tied for third at 7 over after a 3-over 75 Monday. Annie Paris of Brentwood, Tenn., is solo seventh at 8 over following her second-round 73. Senior Emily Salamy added a second-round 76 and currently sits T-10 at 4 over.

This week’s tournament at Sandestin is Rhodes’ final event of the fall.

Salamy and fellow senior Melissa Kiker (T-33) have been part of two national-championship teams at Rhodes, in 2016 and ’17. And the Lynx have actually hoisted three of the last five NCAA Division III team titles.

But last season was a rebuilding year as Rhodes graduated three key players and failed to make the NCAA Championship. Clary said his team expected the down year as its two seniors last season – Alexa Calomiris and Maddie Rhodes – studied abroad and missed the entire fall. When the two seniors returned in the spring, the Lynx couldn’t quite get it together, ultimately finishing fifth at the Southern Athletic Association Championship.

“We were hopeful we could get back to the NCAA tournament, but we were not a top-10 team,” Clary said.

That is far from the case this season. Rhodes entered the Golfweek Division III Fall Invitational ranked sixth in the WGCA Coaches Poll. The Lynx also won the Montgomery Intercollegiate earlier this fall and held the Day-1 lead at the NCAA Division III Preview before placing fourth.

Clary said there’s been no secret to his team’s rebirth this fall. No extra practice. No magic golf balls. Just better time management.

“We’re good enough to compete with the best teams in the country, but this year it seems like there’s 8-10 teams that have the ability to shoot that number,” Clary said. “We’ve been fortunate with the national championships that we’ve won that we’ve had our games those weeks, and that’s what it takes.

“We had our day today, and somebody will have theirs – just hopefully not tomorrow.”

Behind Carnegie Mellon at 53 over is Berry College at 54 over. Birmingham- Southern is fourth at 57 over and Methodist is fifth at 60 over. Defending champion Washington-St. Louis is sixth at 61 over despite playing with four players on Monday. (Emily Carnes left after Round 1 because of a death in her family.)

On the men’s side, top-ranked Emory held onto its lead. But the Eagles’ advantage did shrink after an 8-over 292. Emory, at 4 under, is now just six shots up on second-place Huntingdon, which had the round of the day, a 3-under 281.

Huntingdon’s Stephen Shepherd shot 4-under 67 Monday to tie the individual lead at 4 under with Guilford’s James Mishoe and Southwestern’s Sutherland Stith.

Emory still has four players in the top 10, though first-round leader Eric Yiu fired a 76 to drop to even par and into a share of 10th.