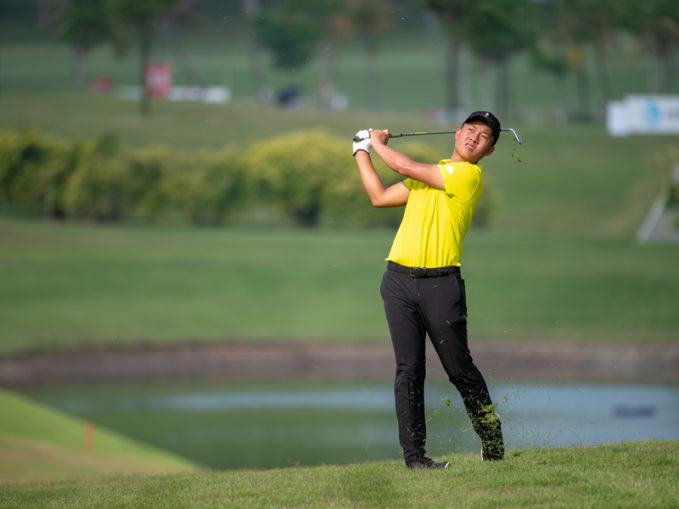 Defending champion Yuxin Lin of China fired a superb third round 62 to take a one stroke lead into the final day of the Asia-Pacific Amateur Championship at Sentosa GC in Singapore.

China’s Yuxin Lin carded a 62 on Saturday at Sentosa GC in Singapore to lead Lloyd Jefferson Go of the Philippines by a single stroke with 18 holes left to play in the 2018 Asia-Pacific Amateur Championship (AAC.) Lin is looking to become the first player since Hideki Mastuyama to successfully defend this title.

2017 AAC winner Yuxin Lin of China made his move on day three of the AAC at Sentosa GC. He raced to the turn in just 29 shots and then birdied the 10th to reach seven-under for the day and nine-under for the championship. At that stage a 59 looked a possibility, but his serene progress was hampered by a dropped shot on the 12th. He recovered with birdies on the 14th and 16th holes and needed two pars to finish to tie the lowest score ever posted in the AAC. He left himself a tester on the 18th but, displaying the nerve that won him the championship last year, the 17-year-old rolled the par putt home to card 62.

“I had a thought about 59 having gone out in 29 but then I dropped a shot on 12 unfortunately,” he said. “I’ve been striking it good and waiting for the putts to drop and today the putter got working, that was the key. It means a lot to me to hold this title and I would love to be the first since Hideki Matsuyama to successfully defend this championship.”

Adding to the excitement for Lin was the fact that he was greeted after the round by R&A ambassador Tom Watson who has made the journey to Singapore to watch the final stages of the championship. 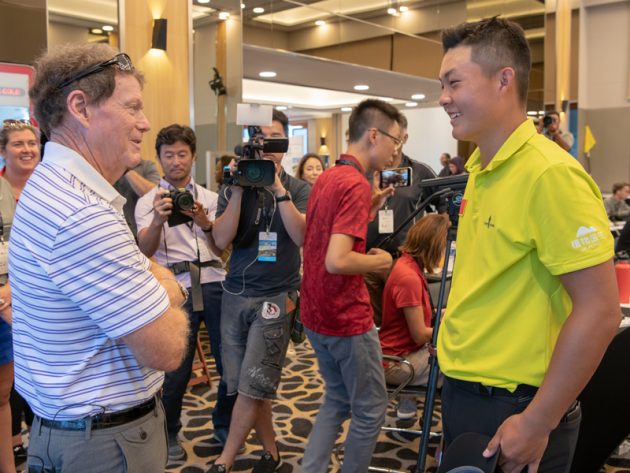 Lin’s fireworks inspired his playing partners on to good scores. Takumi Kanaya of Japan fired a 64 to reach eight-under while India’s Rayhan Thomas carded 65 to go into round four on seven-under.

It was soon after Lin’s group completed their rounds that the players were taken off the course because of a weather warning. There was a delay of two before the leaders could get back out on track.

Overnight co-leader Lloyd Jefferson Go of the Philippines is Lin’s closest pursuer after a steady third round of 69. He bounced back well after driving out-of-bounds on the 8th and making double, then coped well with the weather dealy. Jefferson Go is nine-under-par with a group of five players one more back on eight-under. They are Japan’s Takumi Kanaya and Keita Nakajima, K.K. Limbhasut of Thailand and Chinese players Zheng Kai Bai and 2015 AAC winner Cheng Jin.

“I felt I fought well today,” said Jefferson Go. “I feel I have a chance tomorrow and I think one shot is not a big gap. I need to do everything good tomorrow. With so many people in contention, it’s going to be a shoot-out.”

One of the rounds of the day was by Indonesia’s Naraajie Ramadhan. He carded an impressive 63, featuring eight birdies and just one shot. Beginning the day on level par, the 18-year-old is now at seven-under and back in contention, just three back. 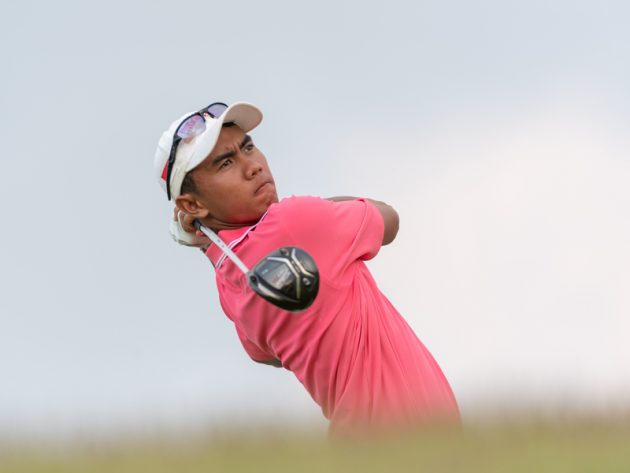 Andy Zhang of China also posted a good score on “moving day.” The 20-year-old fired a 64 to climb the board and also reach seven-under, tied with Ramadhan, Rayhan Thomas and Korea’s Won-Jun Lee.

With 13 players within four shots of the lead, the incredible prizes in this tournament are very much still up for grabs.

Organised by the Asia Pacific Golf Confederation (APGC) in conjunction with The R&A and The Masters Tournament, the winner of this tournament receives: An invitation to compete in the 2019 Masters Tournament plus direct entry into The 148th Open Championship at Royal Portrush in 2019. He will also receive an exemption into The Amateur Championship to be played at Portmarnock.

The runner(s)-up receive a place in The Open Qualifying Series with the opportunity to qualify for Royal Portrush.